It is a nice mixture of Toyota parts and parts of the old classical modern Toyota to give us a strange mix in one car, but this exciting project really interesting In the world of off-road cars, Toyota manufactured a car from a few creative cars. One of those cars was the Toyota FJ model of the late 1970s, the new Toyota FJ, which wanted Allers and Rods  to rebuild one of those vehicles to be in the forefront of the FJ. The point is to use only the local parts of the car to be everything on the Toyota Fj 76 can be bought from the Toyota spare parts except for the front car of the original car and the interior of the car Equivalent glass mixed. 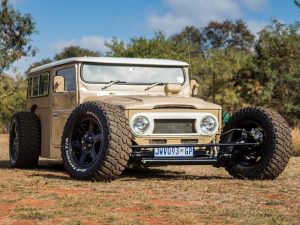 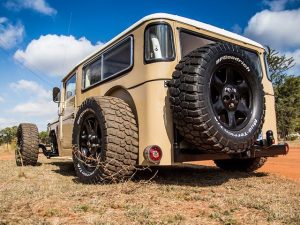 After 1200 hours of work, these were the crazy results that it is a very large wheels have been modified made many swear that it is made by Photoshop   is not real and there are also spare parts are not from Toyota was installed in the front suspension of the car, which was manufactured at home and The wheels of the Land Rover Discovery and Kano were the two sides of the difference, which consisted of two longer sides to maintain the required width. The seat was from the Jeep Wrangler and the exhaust was from the VW Golf 1. The other parts were from Toyota in the main cabin of the car. electronic measurement Locally produced like Lexus radio and due battery and steering wheel type Momo and a B&M shifter all protected by an integrated roll cage to improve safety.


With this new FJ, we got a new generation of powerful 300 hp from the Lexus 1uz V8 and have been able to make it run by original Lexus ECU. All this has been done to make the old Toyota FJ certified and it is sure that it now has It covered thousands of miles in the last year and travel to shows around  the country while the 300 hP is not found in the servo v8 modern but in a car as light as this, things get very fast, very quick

In order to ensure the dignity and the roots of Toyota in this project was painted car original color using the color code used by Toyota in the paint of the car in 1976, which is now enough to be enough to be maintained while preserving the old school of the FJ also, so the work Finished on the fullest.


Select Package and you car